Posted by Pamela Moran on Tuesday, 02 December 2014 in ABCs of the PSI World 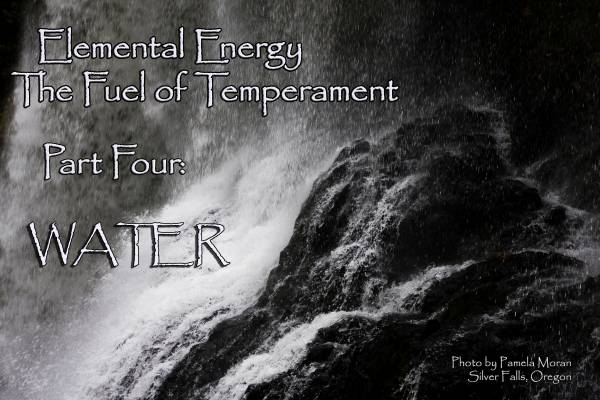 Water signs, (Cancer, Scorpio and Pisces) are the most emotional of all the signs. You could say they thrive on emotions, on feelings, and will follow those over logic any day of any week. Any hour of the day. Decisions can be made, not just on their own initial reaction, but on how something feels - internally - to them. They react based on their gut, on a type of intuition that originates inside themselves. Water comprises a large percentage of our make-up, after all, and Water signs are keyed into that. To the ebb and flow of human, emotional tides.

All that can make for drama. High drama, at that. Weary, mind-numbing drama. Based on deep-seated emotional reactions.

But it can also make for some of the most empathetic, genuinely caring people. The kind of person who feels what you feel. Who truly understands what you've been through and why you feel the way you do. Those are the Water people who need to learn boundaries at a young age, otherwise their sense of self is blurred and they have a hard time differentiating their feelings from those of others.

Cancer, the first Water sign, is also a Cardinal sign. Think running creek or river. Emotions in motion. They’re the moodiest of the three water signs, the ones who will emotionally react the fastest, who will see a slight the quickest. Being Cardinal, first is a keyword here. Cancer represents mothering – our first nurturing. Whether by blood or made by choice, family is central to Cancer. If they deem you one of theirs, they will do their best to take care of you, sometimes whether you want to be taken care of or not. They know best, you know.

Scorpio, Fixed Water, is like a dark, nearly bottomless, blue lake. Smooth water on the surface, deeper than you realize underneath. Fixed, those emotions run as deep as that lake and can be as mysterious. Dark, seething and at times unfathomable. More than any other sign, Scorp holds on to its secrets, holds on to the past and is a firm believer in the adage ‘Revenge is best served cold’. But they’re also as loyal as any of the other Fixed signs. And with those emotional depths, they have an uncanny ability to understand others’ emotional quandaries, at times better than the person experiencing them. Scorpio needs to be as aware of their own inner emotional makeup as they are of others, otherwise the danger lays in Scorp’s innate ability to twist that knowledge against the other person. Boundaries aren’t one way streets, and Scorpio, a bit more than the other two Water signs, are capable of using that to their own advantage.

Pisces, the last of the Water signs is also the last of the Mutable signs, in addition to being the very last sign of the Zodiac. Pisces is like the ocean, with her tides, constantly ebbing and flowing along with all the underwater currents well hidden beneath the surface. Of all the Water signs, Pisces is the most prone to having trouble differentiating between their own emotions and those of another, especially if that other person is important to them. They need boundaries, not only for their own sake, but also for the sake of those around them. Passive-aggressive behavior, mostly as a self-protective device, can become second nature if they’re not careful, if they’re not fully aware of what they’re doing. If fully aware and able to control that boundary, an empathetic Pisces can be a balm to those in emotional distress. The risk is in Pisces taking all that inside and not letting it go.

Jake Carrigan, hero of STOLEN SPIRIT, is a poster child for Cancer's Emotions in Motion – some so deep, he doesn't understand what it is he's feeling. With the deaths of his brother and the woman he loved, he's shut himself off and is pretty much hiding, liable to strike out at anyone trying to pull him out of his funk (just ask his sister, Rily, about that!). Now, Hannah's voice is haunting him but how is he supposed to comfort and nurture a ghost? Especially when he's sure she's nothing more than a figment of his overactive guilt complex for letting her and his brother down in the past.

A strong psychic, Gabriel Nicholetti of BLIND SIGHT learned a multitude of hard lessons about boundaries at an extremely young age. Pragmatic about his visions, this Pisces doesn't usually have a problem being on the outside. There are times it's better that way, for those whose deaths he sees and for himself. Since he can't save them, getting close only makes their loss harder to take. Until he sees Rily Carrigan, dead on some forest floor. That blonde gets under his skin until he's determined to find a way to save her. The fact he's never saved anyone from his visions before isn't going to stop him from trying.

Ramon Ortega started out as a secondary character in both STOLEN SPIRIT and BLIND SIGHT. As a Scorpio and a narcotics cop in Portland, OR, Ramon has presence. And a vendetta. He's seen a lot, been through a lot. Lost a lot. With a bruja – witch – for a grandmother, he's also seen a lot of explainable occurrences. While he's sworn vengeance on those responsible for his partner's death, that vengeance comes with a price. How far will he go? How much will he sacrifice? Who else will he lose? Ramon's story, tentatively titled RELUCTANT HEALER, is in the works. I hope you'll look for it.

So who are those emotional, watery people in your life? Or do you embody Water?