Warning: count(): Parameter must be an array or an object that implements Countable in /home/chrisscheibe/public_html/libraries/joomla/application/application.php on line 481
 Elemental Energy: The Fuel of Temperament (Part One) - EasyBlog

This is some blog description about this site

Elemental Energy: The Fuel of Temperament (Part One)

Posted by Pamela Moran on Tuesday, 28 October 2014 in ABCs of the PSI World 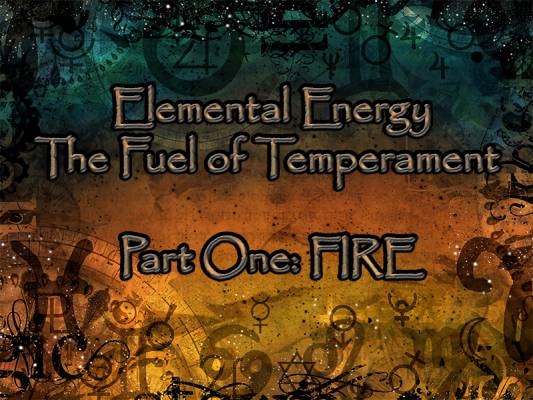 Last time we talked about Modality: Cardinal, Fixed, Mutable. Now, over the next four posts, we're going to take that a step further and discuss the four types of energy fueling those modes: Fire, Earth, Air and Water.

(Please keep in mind these are Archetypes. Pure energies. No one is only an Aries or a Pisces. We’re the sum of all our parts, from our Sun Signs to our Ascendant signs and everything in between.)

Fire signs (Aries, Leo and Sagittarius) are, at their hearts, spontaneous, impulsive and, yes, fiery. These people are passionate and enthusiastic with healthy egos. That’s not to say you won’t come across a Fire person lacking self-esteem. Of course that happens. However, there must be something drastic in this person’s background to have ground his/her ego into the soil because with fiery people, and there’s no easy way to say it, the world revolves around them.

That’s just the way it is.

They make no excuse for it and see nothing wrong with it. At all.

Writing that makes me smile because it’s an attitude I admire. If we’re not okay with ourselves, how are we going to be okay with the rest of the world?

Fire is a combustive fuel, it can be a beautiful thing to witness although sometimes preferably from a safe distance. Other times, Fire is all consuming, scary and occasionally ugly, especially in its aftermath. Have you ever witnessed the scorched earth after a wildfire? The remnants of house burnt to the ground?

Aries has a quick temper, fast to ignite. They’re the most impulsive, they catch that spark and away they go. Aries is Cardinal, the first sign, the one who starts the Zodiac. The beginning. First. Fast. Fast to burst into flames, fast to burn, fast to burn out. On the upside of that fastness, they’re also quick to forgive. To forget. There's too much else out there to capture their attention to dwell on the past. The downside, try nailing them to the ground. They’re already off, starting something else and aren't waiting around to see if you can keep up.

Leo is the most loyal of all the Fire signs. Fixed modality, solid and true, they’ll usually stick beside you through thick and thin. A slow and steady burn, that’s Leo. Think warm, crackling flames in the fireplace. Contained. Relatively safe – we are talking about Fire. Being fixed, however, Leos are also the most stubborn. And the most unforgiving. That Fixed modality again. Long memories. Leos thrive when at the center of a family type group. Lion Pride is very real for most Leos.

Sagittarius lives in the world of ideas, of philosophies to get excited and passionate over. There may be no one else more capable of igniting others with the passion of Sag’s ideas or ideals. To have people follow because they've been caught by that glow of idealism, of excitement, so close to the surface of every Sagittarian. However, being Mutable, Sag can get ensnared in a tendency to let another glow-flit capture their attention because they’re highly susceptible to the risk of being pulled in a different direction, leaving their previous passions as nothing more than smoldering embers. Still, try to resist a Sag’s powerful, fiery pull when they’re in the throes of expounding on their latest aspiration or ideal. Or resist tagging along with them on their latest adventure when they've invited you along.

As a writer, one of the wonderful things about Astrology is utilizing the ready-made Archetypes for a jumping off point in character building.

In the PSI world, we have Ben Garrett, head of the Institute for Psychic Studies but also the leader of the PSI Sentinels. A definite Alpha in his own right, he was forced in the past into a lone wolf position. Those reasons are touched on in BLIND SIGHT, but as a Leo, Ben isn't happy without family. So he’s essentially made his own with the PSI men and women he has mentored over the years. I know he’s a Leo and from there I have a better understanding of his reactions to people, to events and situations. That’s not to say he hasn't surprised me a few times. Loyal and steadfast, he has an exceptionally long memory and an unerring sense of what is right, what rules he’s willing to bend and what is completely unacceptable. He won’t tolerate anyone threatening his people.

Rily Carrigan, the heroine in BLIND SIGHT (and sister to the hero in STOLEN SPIRIT), is an Aries. Hot temper, quick to flare, but just as quick to forgive. Constantly on the move, she’s a pleasure to watch, just ask Gabe. ;o) She’s impulsive and has absolutely no desire to dwell on the past. Of course, that’s what she’s forced to do when an old friend is found dead and the key to her death may be locked in their shared background.

My Sag character, at least for now, is only a secondary character who hasn't actually made it to the page yet. He’s rich, owns his own island in the British Virgin Islands (not too big – doesn't want to be too flashy), and his interest in the PSI goes several years back to Gabe Nicholetti (hero in BLIND SIGHT) bringing the gang who kidnapped and murdered his sister to justice. Mr. Sag will find his way to the page soon.

Are you a Fire sign or do you have someone in your life who embodies the Fire element?

Join me next week when we talk about the next element, Earth.

If you'd like to check out the PSI on Amazon: PSI Sentinels

Tagged in: Archetypes Astrology Elements Modality PSI Sentinels
Pamela Moran
Whether painting, out on a photo shoot or writing, Pam has always had a bend toward the creative side of life. Her favorite is when she can combine any of those with travel. Places get into her blood and she loves to explore the possibilities, always with characters and a story in mind.